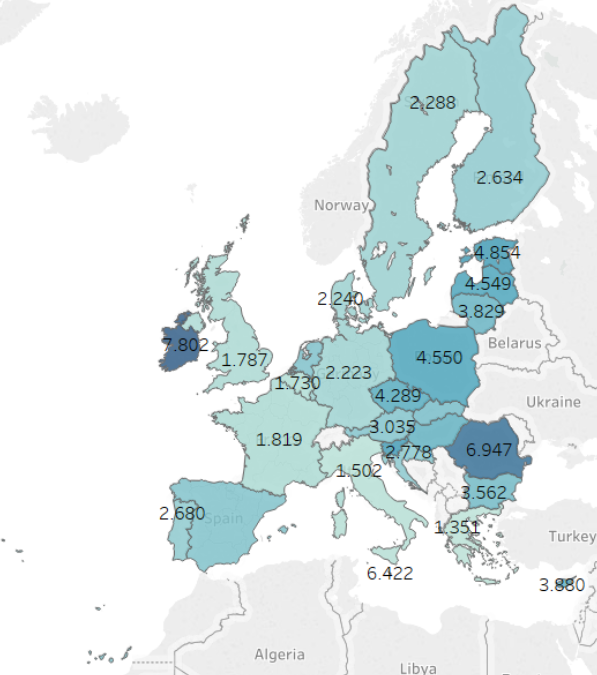 Recent economic recession and Brexit has raised doubts about the EU membership among member nations. This paper analyzes the public data from World Bank to determine the impact to the economic development of Ireland since joining the EU on 1st January 1973. The paper shows that EU membership has a positive relationship with the development of Ireland.

Economy has transformed from agricultural dependent to industrial focused with annual GDP growth which can be attributed to the population growth as well increase in exports of merchandise, goods and service, inflow of foreign direct investment, trade and gross domestic savings. The number of patents and trademarks has also increased for residents over the years. The life expectancy of people living in Ireland has increased while the death rate and birth rate has decreased. There has been a social shift with more people living in urban areas, entering third level education and greater participation of females in the labour force. However, there are still some issues which Ireland has to tackle such as unemployment among 15-24 years old males and part-time employment among adult females.

Ireland became a member of the European Union (EU) and joined the single market on 1st January 1973. Before accession to the bloc, Ireland had decades of an underachieving economy which was heavily dependent on the UK. Since then it has transformed into a prosperous and confident country which is a major influence in the global politics. The economy has transformed from agricultural dependent to one driven by the tech industry and global exports. The membership has also affected every part of Irish society from the way the citizens work, travel or even shop [1].However, the recent political turmoil of Brexit and 2008 recession crisis has left certain citizens to wonder the importance of the membership. Sometimes, there is a doubt in EUs ability to provide a good living standard. Economic development requires economic growth to reflect economic as well as social growth.

The common indicators to assess the development includes:

This analysis uses the economic development indicators from world bank to show the benefits of joining the EU.

The data is a collection of comparable statistics regarding development gathered by the World Bank from different official sources. The data constitutes different national, regional and global indicators such as economic growth, social development, macroeconomic vulnerability and debt for 217 economies. It is a time series data and chronological coverage is 1960-2017. It was released on June 11, 2010 and last updated on November 14, 2018. It is licensed under CC-BY 4.0 and classified as Public under the Access to Information Classification Policy. The users from inside the bank and outside the bank can access the dataset. The data was downloaded in csv file version along with the metadata[3]. There is no literature using the dataset for the analysis of economic development of Ireland.

The following are different steps required for a comprehensive analysis:

The original data contains 63 columns and 4200024 rows. The columns include country name, indicator name, indicator code and observations from 1960-2017. The dataset is reduced by selecting the data from 1973 (the year when Ireland joined the EU) to 2017. The columns with country code and indicator codes are also deleted. Ireland is selected as the country name from the dataset to extract data relating to Ireland only. The data is transposed so that the dataset has year as index and indicator name as columns to help in formatting the dataset. The values for year are transformed into datetime and the values for indicator name are converted in format which suitable for the statistical and numerical techniques. The columns with missing values for 2015 are removed to ensure the recent data is available. The columns with more than 30 % missing values are also dropped. The new dataset has 45 rows and 374 columns. The data is further reduced by selecting 101 features which are important according to the literature.

The techniques used include:

Fig. 1 is a summary statistic in percentage. Since joining the EU, GDP growth has varied a lot because of the standard deviation of 4.60. The minimum value is -4.62 while the maximum value is 25.5. The mean annual GDP growth is 5.05. The population growth does not suffer from the same variability because the standard deviation is only 0.72. The mean of the population growth is 1.02.

Fig. 2 shows the annual growth for GDP and population over the years. It shows that GDP growth has mostly stayed over 0% except during the recession when it fell to the minimum value at -4.6%. The maximum annual population growth was 2.89% right before the recession started and dropped significantly to 0.5% in 2008. Further, the population growth influences GDP and vice versa. There is an outlier GDP growth of 26.3% for 2015. The reason for such a high rate of increase from 2014 is the relocation of multiple, large multinational companies in Ireland. These companies brought their intellectual property (IP) from other countries. The use of intellectual property to generate sales and the size of the companies contributed to such an increase[8].

Fig. 4 shows that the simple linear equation is GDP = (-6.447e+11) + (1.973e+05) * Total Population with a standard error of 6640.5 (a possible uncertainty between the true GDP and the total population).F-statistics is 883.0 and Prob(F-statistics) is very small at 2.69e -30. Hence, there is a very small chance that regression parameters are zero. Regression equation has validity in fitting the data.The coefficient of determination (R-squared value) determines the proportion of variance in GDP that can be accounted for by knowing total population and vice versa. The regression model explains 95.4% of the variation in GDP due to total population. Hence,regression model accounts for most of the variance and points of data fall close to the fitted regression line. Consequently, it is a very good model fit to the data.

Fig. 5 shows that exports/imports of goods and service, inflow of foreign direct investment, trade and gross domestic savings have a positive association with GDP. On the other hand, gross national expenditure, expenditure by accounts relating to the consumer spending such as households and non-profit institutions serving households have a strong negative relationship. Similarly, the household’s expenditure and domestic savings have a high negative association with the R-value of 0.99 while the national expenditure and household expenditure have a positive correlation with the R-value of 0.92.

Fig. 7. Visualization of Annual GDP Growth Rate of EU for 2017

Fig. 9 is the t-test score for the patent’s application made by both residents and non-residents.The difference between the patents by non-residents is higher than the residents with a mean of 642.29 and a small t-score of -3.0984. Hence, the two groups are three times as different from each other as they are within each other. It also means that the results are less likely to be repeated. A further analysis of the data shows that the patents for non-residents have been falling over the years with 2088 patents in 1973 to 85 patents in 2016. The patents for residents have been increasing and show that Irish are moving to a knowledge-based economy. 2015 saw an increase in the number of patents by non-residents to 190 from 58 in 2014 as pointed out in the OECD report [8].

Fig. 12 is a visualization of the data for merchandise being grouped into bins of 4 years. In the first 10 years after joining the EU, Ireland used to import more merchandise than export it. Since then Ireland exports more than it imports. During the recession period of 2009-2012, Ireland’s import dropped slightly due to lack of consumer demand. However, the exports have been steady and even increasing slightly since 2005. The R-value of 0.9892 between exports and imports of the merchandise shows that there is a strong positive association between the two.

Fig. 13 shows a negative association between the exports of manufactured goods and agricultural and food products with the R-value of 0.93 and 0.95 respectively. However, there is a positive relationship between food exports and agricultural exports. Hence, agricultural products are mostly food related.

Fig. 14 shows that Ireland has become more of an exporter than an importer of the goods and services over time. This has helped to have a strong economy. Even during the recession, Ireland was able to export more than it imported. The gap has also increased between the two.

Fig. 14. Visualization of Imports and Exports of Goods and Services

Fig. 15 shows relationship over time. It confirms that the participation of female has increased since 1984.

Fig. 16 displays the simple linear equation is Youth Employment to Population Ratio = 52.1476 + -0.5371 * Total Youth Unemployment with a standard error of 0.112 measuring the uncertainty (a possible difference between the true youth employment to population ratio and the total youth unemployment).The youth is someone who is 15-24 years old-statistics is 22.98 and Prob(F-statistics) is very small at 3.38e-05. Hence, the regression equation has some validity in fitting the data. R-squared value is 0.411. Therefore, the regression model explains 41.1% of the variation in youth employment to population ratio due to total youth unemployment. Hence, most of the variance is not accounted for by the regression model and the data points fall far away to the fitted regression line. Consequently, it is not a good model fit to the data.

Fig. 16. Linear Regression Analysis between the Youth Employment to Population Ratio and Total Youth Unemployment since 1983

Fig. 17 shows that young males are more likely to be unemployed than young females. The youth unemployment to its lowest level at almost 5% in 2000. It increased during the recession and reached the highest level in 2010 to almost 30%. As the economy is recovering the youth unemployment is falling again.

Fig. 17. Visualization of the Youth Unemployment since 1983

Fig. 18. Summary Statistics of Employment to Population Ratio since 1983

Fig. 19. Correlation Analysis of Employment to Population Ratio since 1983

Fig. 20 shows that the simple linear equation is Employment to Population Ratio (15+) = 62.2377 + 0.0228 * Part-time employment among Males(15+). The standard error of 0.103 measuring the uncertainty (a possible difference between the true employment to population ratio and the part-time employment among male).F-statistics is 0.04915 and Prob(F-statistics) is 0.826. Therefore, there is 82.6 chance in 100 that all of the regression parameters are zero. This high value suggests that the regression equation is unable to fit the data. The independent variable is purely random with respect to the dependent variable. The regression model explains 0.1% of the variation in employment to population ratio due to part-time male employment. Consequently, it is not a good model fit to the data.

20. Regression Analysis of Employment to Population Ratio and Part-time Employment among Males since 1983

Fig. 21 shows that the simple linear equation is Employment to Population Ratio (15+) = 13.6868 + 1.1688 * Part-time employment Females (15+). The standard error of 0.108 measures the uncertainty between the true employment to population ratio and the part time employment among females. F-statistics is 118.0 and Prob(F-statistics) is 1.96e12. This low value indicates that there is a small chance that all of the regression parameters are zero and that the regression equation does have independent variable that is not purely random with respect to the dependent variable. The regression model explains 78.6% of the variation in employment to population ratio due to part-time male employment. Consequently, it is a good model fit to the data. Further, the female population is most likely to be in part-time employment.

Fig. 21. Regression Analysis of Employment to Population Ratio and Part-time Employment among Females since 1983

The paper analyzed a few selected indicators from the dataset to determine the economic development of Ireland using python libraries (statsmodels, pandas and matplotlib) and Tableau. A more comprehensive analysis will involve looking at more factors as well as confirming the findings using other data sources and using other techniques.

Since joining the EU, Ireland has developed economically and changed socially. The statistical and mathematical analysis of the data from World Bank shows that the economy has transformed from agriculture dependent to dependent on manufacturing merchandise, goods and services industry. There has been growth in the population due to reduced death rate and increased life expectancy. The birth rate has also decreased. The population is young and highly educated which helps the multinational companies making decision to base their operation in Ireland. The participation of females in the job market has increased over the years but females are also most likely to be employed in part-time jobs.