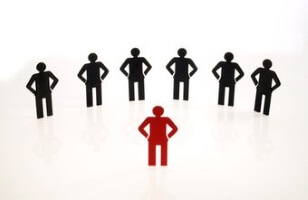 Is achieved through the creation of semi-autonomous business units.  This allows each business unit to focus on a particular market niche and so respond more flexibly and adaptive to the needs of the particular niche.

With fewer managers, close supervision and control are less possible, so that power is devolved down the hierarchy giving the people more autonomy in their work. This open door approach enables collaboration among different departments and resources of all levels encouraging a team atmosphere.  However the fewer layers in an organisation can mean fewer opportunities to progress and this may lead to a poor retention of staff.

Example Facebook, Google.  These companies represent a modern collaborative and creative environment, however, this can often lead to a culture where there is and expectancy of resources working late, weekends and unsociable hours.

Rather than have each function work relatively independently and pass things to the next function in the process, people are brought together to work in cross-functional teams

The aim is to encourage a faster response rate so that lead times, for example on new product developments, are considerably reduced.  This can cause issues as resources are effectively reporting into two managers, so there can be a conflict of interests when prioritising work.

Instead of attempting to integrate new required skills and competencies into the org. hierarchy, organisations are increasingly working in collaborative alliances and partnerships with other organisations or using outsourcing arrangements to service particular internal requirements

Example Ikea and its suppliers, apple and Belkin, McDonald’s and Toys’R’Us, Energie and Chopped

Organisations are increasingly geographically distributed, working on a global and not on a national basis.  This is achieved through acquisitions of businesses in other countries, through partnership arrangements or through internal international growth.  This allows them to capitalise on global market opportunities and so potentially grow and profitability.