In this article, I present a few modern techniques that have been used in various business contexts, comparing performance with traditional methods. The advanced techniques in question are math-free, innovative, efficiently process large amounts of unstructured data, and are robust and scalable. Implementations in Python, R, Julia and Perl are provided, but here we focus on an Excel version that does not even require any Excel macros, coding, plug-ins, or anything other than the most basic version of Excel. It is actually easily implemented in standard, basic SQL too, and we invite  readers to work on an SQL version. 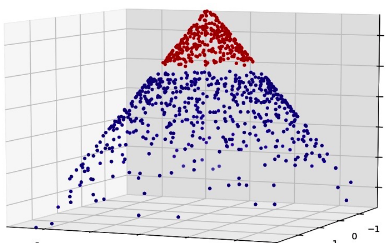 Source for picture: Logistic Regression vs Decision Trees vs SVM

In short, we offer here an Excel template for machine learning and statistical computing, and it is quite powerful for an Excel spreadsheet. The techniques have been used by the author in automated data science frameworks (AI to automate content production, selection and scheduling for digital publishers) but also in the following contexts:

The technique blends multiple algorithms that at first glance look traditional and math-heavy, such as decision trees, regression (logistic or linear) and confidence intervals. But they are radically different, can fit in a small spreadsheet (though the Python version is more powerful, flexible, and efficient), and do not involve math beyond high-school level. In particular, no matrix algebra is required to understand the methodology.

The methodology presented here is the result of 20 years worth of applied research on various large industrial data sets, where the author  tried for years (eventually with success) to build a system that is simple and work. Most everyone else believed or made people believe that only complex system work, and have spent their time complexifying algorithms rather than simplifying them (partly for job security purposes.) 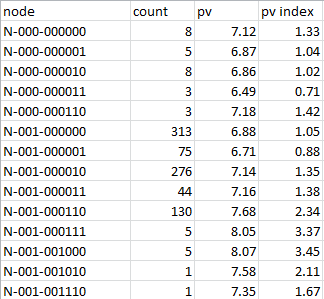 Who should use the spreadsheet?

First, the spreadsheet (as well as the Python, R, Perl or Julia version) are free to use and modify, even for commercial, purposes, or to make a product out of it and sell it. It is part of my concept of open patent, in which I share all my intellectual property publicly and for free.

The spreadsheet is designed as a tutorial, though it processes the same data set as the one used for the Python version. It is aimed at people that are not professional coders, people who manage data scientists, BI experts, MBA professionals, and people from other fields, with an interest in understanding the mechanics of some state-of-the-art machine learning techniques, without having to spend months or years learning mathematics, programming, and computer science. A few hours is needed to understand the details. This spreadsheet can be the first step to help you transition to a new, more analytical career path, or to better understand the data scientists that you manage or interact with. Or to spark a career in data science. Or even to teach machine learning concepts to high school students.

2. Description of the techniques used

Here we explain the differences between the standard and the Excel versions, and we provide an overview, at a high level, of the techniques being used, as well as why they are better in pretty much all applications, especially with unstructured and large data sets. Detailed descriptions are available in the articles referenced in this section.

The Python version  (also available in R, Perl and Julia) of the core technique is described here. Python / Perl offer the following advantages over Excel:

The Excel version has the advantage of being interactive, and you can share it with people who are not data scientists.

But Excel (at least the template provided here) is mostly limited to nodes that form a partition of the feature space, that is, it is limited to non-overlapping nodes: see HDT version 1.0. So even if we have two nodes, one for the keyword data, and one for the keyword data science, in version 1,0, they are not overlapping: text buckets contain either data and not data science, or data science. In version 2.0, we no longer have this restriction. Note that nodes can be a combination of any number of keyword values or any other variables (called features in machine learning), and these variables can be quantitative or not.

For those familiar with computer science, nodes, both in the Excel or the Python version, are represented here as key-value pairs, typically stored as hash tables in Perl or Python, and as concatenated strings in Excel. For statisticians, nodes are just nodes of decision trees, though no tree structure is used (nor built) in my methodology -- and this is why it is sometimes referred to as hidden decision trees (HDT). But you don't need to understand this to use the methodology or understand how the spreadsheet works.

What is it about? What kind of algorithms are offered?

The methodology features an hybrid algorithm with essentially two components:

A lot of intelligence and creativity is put into creating great predictors (the features) and then perform sound feature selection. However, the features used in the spreadsheet and in the previous article on HDT (dealing with the same data set) will apply to all NLP (natural language processing) systems in numerous contexts.

In addition, while not incorporated in the spreadsheet, confidence intervals can be computed for each node with at least n observations (say n = 10) using percentiles for the response, computed for all data points (in this case, representing articles) in the node in question, see example at the bottom of section 3. This percentile function is even available in Excel. Then, data points in a node with too large a confidence interval are scored using the Jackknife regression rather than the pseudo decision tree. By scoring, I mean having the response estimated or predicted. By response, I mean the variable that we are trying to predict: in this case the page views number attached to an article (indeed, its logarithm, to smooth out big spikes due to external factors, or the fact that older articles have by definition more page views -- see page view decay prediction for details.)

So no statistical theory is used anywhere in the methodology, not even to compute confidence intervals.

Why a brand new set of machine learning tools?

Classical decision trees, especially the large ones with millions of nodes from just one single decision tree and involving more than 5 or 6 features at each final node, suffer from similar issues: over-fitting, artificial feature selection resulting in difficulties interpreting the results. maintenance challenges, over-parameterization making it more difficult to fine-tune, and most importantly, lack of robustness.

The data set and features used in this analysis are described here. The spreadsheet only uses a subset of the original features, as it is provided mostly as a template and for tutorial purposes. Yet even with this restricted set of features, it reveals interesting insights about some keywords (Python, R, data, data science) associated with popularity (Python being more popular than R), and some keywords that surprisingly, are not (keywords containing ''analy", such as analytic.) Besides keywords found in the title, other features are used such as time of publication, and have also been binarized to increase stability and avoid an explosion in the number of nodes. Note that HDT 2.0 can easily handle a large number of nodes, and even HDT 1.0 (used in the spreadsheet) easily handles non-binary features.

There are 2,616 observations (articles) and 74 nodes. By grouping all nodes with less than 10 observations into one node, we get down to 24 nodes. Interestingly, these small nodes perform much better than the average node. The correlations between the features and the response are very low, mostly because the keyword-like features trigger very few observations: very few articles contain the keyword R in the title (less than 3%.) As a result, the correlation between the response and predicted response is not high, around 0.33 regardless of the model. The solution is of course to add many more keywords to cover a much larger proportion of articles. 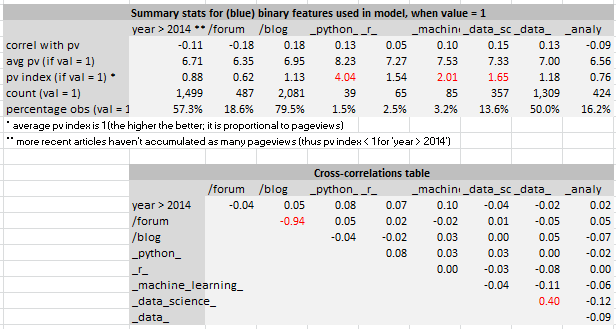 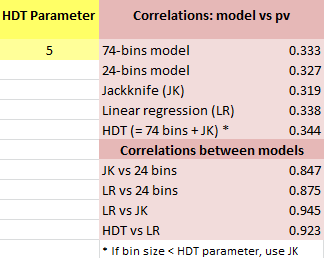 Node N-100-000000 in the spreadsheet has an average pv of 5.85 (pv is the response), and consists of the following pv values: 5.10, 6.80, 5.56, 5.66, 6.19, 6.01, 5.56, 5.10, 6.80, 5.69. The 10th and 90th percentiles for pv are respectively 5.10 and 6.80, so [5.10, 6.80] is our confidence interval (CI) for this node. This computation of CI is similar to the methodology discussed here. This particular CI is well below the average pv -- even the upper bound 6.80 is below the average pv of 6.83. In fact this node corresponds to articles posted after 2014, not a blog or forum question (it could be a video or event announcement), and with a title containing none of the keywords from the keyword feature list. The business question is: Should we continue to accept and promote such poor performing content? The answer is yes, but not as much as we used to. Competition is also dropping this kind of content for the same reasons, so, ironically, this is an opportunity to build a monopoly.  Also variety is critical, and only promoting blogs that work well today is a recipe for long term failure, though it works well in the short term.

To not miss this type of content in the future, subscribe to our newsletter. For related articles from the same author, click here or visit www.VincentGranville.com. Follow me on on LinkedIn, or visit my old web page here. Related articles:

You need to be a member of Data Science Central to add comments!

Singapore is considered to be a developed nation. The developmental stage of a nation is determined by a number of factors including, but not limited to, economic prosperity, life expectancy, income equality, and quality of life.

Thank you Vincent for providing this.

I stumbled upon this whilst looking for an ML program that works within Excel and does not require any programming expertise - mine is now way to rusty, such as it was.

However, what you have provided may not be what I am looking for - certainly at first look.

Perhaps as important, I do not understand much of your abbreviations (from HDT onwards - pv, nodes, etc).

I suspect therefore that I will not be able to use what looks to be a powerful tool.

I shall continue to search for one requiring less expertise in programming. Thanks anyway.

I have transposed part of you excel file over to python which, you can find under the full name Hidden Decission Tree.py.  You may or may not notice that I have come unstuck with the column U (jackknife), mainly because I really do not know excel, and was wondering if you be so kind to explain how this function/calculation works.

In particular, I have no idea how the $AQ$29 and $AH$25:$AP$25 portion of the formula works.  It appears to remain static through all the calculation, yet it must be doing something. Your help would be appreciated in clarifying the $ usage, but in particular, the way that you have used it.

I am much more Excel than anything else so I have not yet got to grips with everything here yet. Can I ask about column G in the Excel model?

In cell G2, in the column headed title length, we find =LN(A3): why not =LN(A2) and similarly for every other row in the table?

Hi Gabriella -- The numerator in those cells should have been COUNT($F:$F). Somehow, it does not produce wrong numbers though.  Thank you for letting me know about this issue.

Vincent, thanks for sharing this file and methodology, good learning, and as you tell, can be used by non-coding business users. Could you check please cell AH8 to AP8 on the first sheet.