Evolution of the Internet 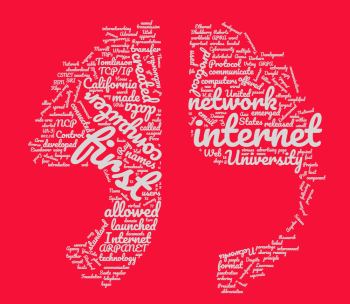 Some of the important years in the evolution of Internet are as follows:

1961: The principle of transmission of data in small portions or packets simplified the transfer of data within a computer network.

1965: The first wide-area computer network emerged. Lawrence G. Roberts and Thomas Merrill connected two computers located in Massachusetts and California with a telephone line. The email started as a way for multiple users of a time-sharing mainframe computer to communicate.

1972: Ray Tomlinson created the first email program. Network Control Protocol or NCP was being used by ARPANET to transfer data. NCP allowed communications between hosts running on the same network.

1973: Development began on a protocol named later TCP/IP. This new protocol allowed diverse computer networks to interconnect and communicate with each other.

1974: The word Internet (abbreviation of internetworking) was used for the first time in a paper on Transmission Control Protocol.

1976: Ethernet which allowed the coaxial cable to move data extremely fast was developed. This was a crucial component to the development of Local Area Networks.

1981: The National Science Foundation released CSNET 56 to allow computers for networking without being connected to the government networks.

1991: The technology of hypertext documents, called the World Wide Web, was developed. The first computer viruses distributed through the internet materialised.

1993: The first internet browser and the first search engine were created. The first radio broadcasts made over the internet.

1999: The first attempts to improve censorship on the internet were made by several countries. The MP3 format appeared. A wireless technology called 802.11b or Wi-Fi was standardized.

2010: 4G Wireless Networks were launched in the United States. US House of Representatives passed the Cybersecurity Enhancement Act (H.R. 4061).

2012: Despite Asia only having an internet penetration of 21.5% made the largest percentage of worldwide internet users.