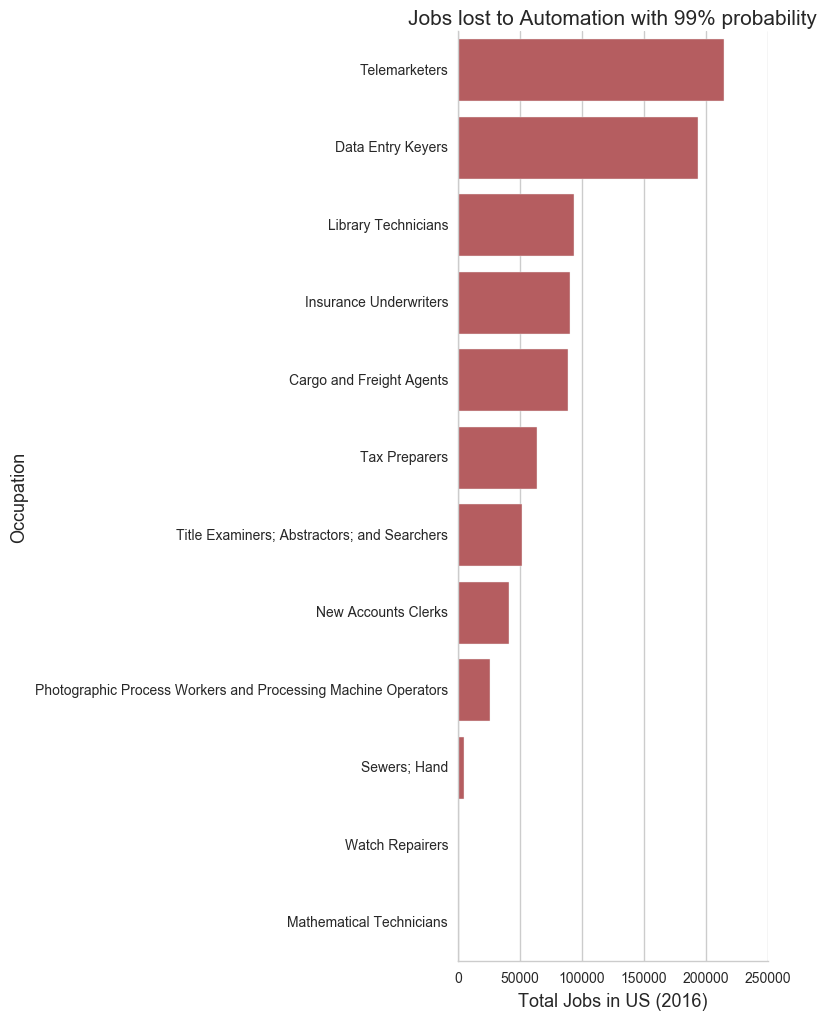 Throughout history, the technological advances have raised fears that traditional jobs will become obsolete. In this post, I find out the jobs which are most susceptible to automation.

“There certainly will be job disruption. Because what’s going to happen is robots will be able to do everything better than us. … I mean all of us,”.

In recent years, robots and artificial intelligence have become a focus of attention for the displacement a significant number of jobs over the next decade. So which jobs are most vulnerable?  Further, how many people are employed in the US in these traditional jobs. This posts finds out about jobs which are most susceptible to automation.

They published a study in 2013 which examined the probability of computerisation for 702 occupations in the US according to Standard Occupational Classification and found that 47% of workers in America had jobs at high risk of potential automation. They concluded that “recent developments in machine learning will put a substantial share of employment, across a wide range of occupations, at risk over the next two decades.

The above plot shows that top 5 jobs at risk by a total number of employees in the US are of Telemarketers, Data Entry Keyers, Library Technicians, Insurance Underwriters and Cargo and Freight Agents. These represent .54% of the total employees in the US in 2016.

The two plots show that many workers in sales and services such as telemarketers, cashiers, salesperson, legal secretaries, bookkeeping,  and accountants face a high risk of computerisation together with workers in transport and logistics such as drivers/sales workers, insurance appraisers for auto damage, and office support such as loan officers, receptionists and security guards. Umpires or referees and other sports officials have also a high probability of losing a job due to automation. Models is another strange possibility.

In the past automation was hurting middle-class jobs such as manufacturing. However, in the next decade, jobs in the office or administrative support, and/or sales will be most affected. These are also lower-income jobs. An entire group of less-educated workers who already weren’t making very much money will be out of work when these jobs disappear due to automation. This means that low earners will be competing for scarce jobs.

Hence, the power of artificial intelligence is threatening not only routine but non-routine jobs. Machine learning is helping programmers to make machine smarter to do non-routine tasks.

This demonstrates that high-skill jobs which are providing service to the public are more secure from automation. These jobs are also highly paid. Therefore, the job market in future will be dominated by highly skilled, highly paid and specialized jobs.