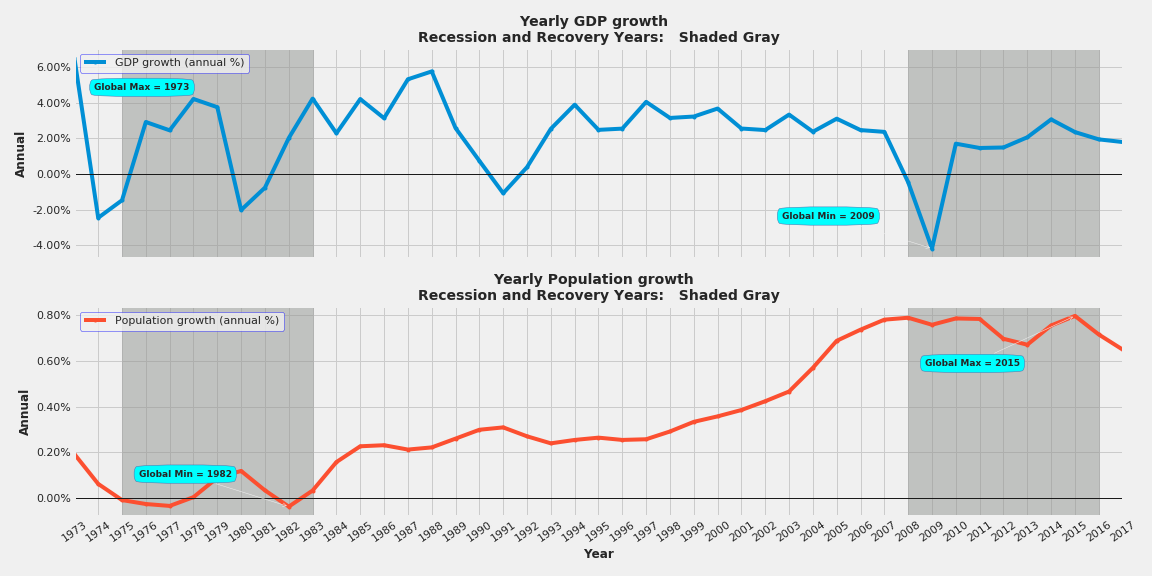 23rd June 2016, voters from United Kingdom (UK) voted in the Brexit referendum to leave European Union (EU) with a small majority vote of 51.9 %. The decision to leave EU since joining in 1973 has consequences that are both profound and catastrophic.

The post analysis of the referendum found that the issues for Brexit can be categorized into socio-economic factors, geographic division, domestic politics sentiment and attitude towards policy. Moreover, Michigan model of voting behaviour states that political sentiment is formed by socio-demographic factors and act as a funnel of causality [5].

A paper suggests that the major reasons people voted in favour of Brexit are the economic insecurity and social inequality felt by the voters because of the transformation of the workforce after the second world war. With the development of UK, the social landscape changed with income equality, wealth gap, rise of knowledge economy, automation, decreased manufacturing sector, erosion of organized labour as well as the increased immigration. This has led to dissatisfaction among the low-waged and unskilled, unemployed, households dependent on social welfare and social housing, families with single parent, poorer and white population living in deprived areas. The analysis further shows the division across generations, class, workers and education with persons receiving pension, low-skilled and less educated doing manual work steered the referendum to a Yes. In summary, the vote for Brexit was the general sense of insecurity for those left behind with sense of pessimism and marginalization [3].

Another issue which resulted in Brexit is the cultural backlash. Since the early 1970’s, the society in the UK has changed to more post-materialistic values of multiculturalism and cosmopolitanism. Voters have more access to college education, promotion of human rights and gender equality. The study states that these values are resented by older generation, white men, less educated and ethnic minorities because of the negative sentiment related to the progress. They feel this is a decline in their cultural values and displacement of traditional norms [6].

The other reason stated is that the British public has always been Eurosceptic since UK joined the EU in 1973. Moreover, referendums are often rejected by the voters because of the voter’s dissatisfaction with government policies. The paper states that voters with anti-immigration, anti-globalization and anti-establishment feeling, less-educated and less economically well voted to leave confirming a pattern from other researches. A survey also shows that public supported leaving EU since 2012. Remain side were more in larger multicultural cities and with more graduates while leave side was mainly from the English countryside, post-industrial north-eastern towns with large working-class populations [5].

This paper focuses on economic development based on aggregate-level data because it reflects social and economic progress. It includes a range of indicators such as:

The aim of the paper is to visualize and analyse the changes in the economic indicators in the UK since joining the EU to determine the impact of the membership on the economy.

The data set is from the World Bank and includes indicators compiled from social sources. The type of data is time-series and includes national, regional and global estimates of topics such as economic growth, energy and extracts, climate change, trade and urban development, social development. The dataset was pre-processed using a programming language called Python prior to doing visualization. The main task was cleaning the data by removing missing values, outliers and inconsistencies.

The first approach to generate the visualizations was to use Tableau to understand and explore the data using its swift, out-of-the-box capabilities. This helped to create interactive visualizations which communicated a good story quickly. The static plots for this report are produced using Python libraries namely matplotlib, seaborn and plotly. Using the libraries enabled more customization and experimentation with different techniques, colour palettes and themes to visualize the data. The plots included in this paper are suitable for interactive demonstration and certain aspects cannot be included such as use of the tool-tip.

The code is available at link

The annual growth rate for GDP determines how fast the economy is growing and includes drivers of growth such as personal consumption, business investment, government funding and net trade. Figure 1 shows that the maximum GDP growth for UK was in 1973 with the rate falling to approximately 2% when the first recession happened in 1975. The GDP recovered over the years but not to the same height as when the UK joined the EU. The rate decreased in 2009 to below 4% and kept on increasing till 2014 before falling again before the referendum. In contrast, the population grew in the UK. The maximum rate was in 2015 at 0.8% and falling the next year. 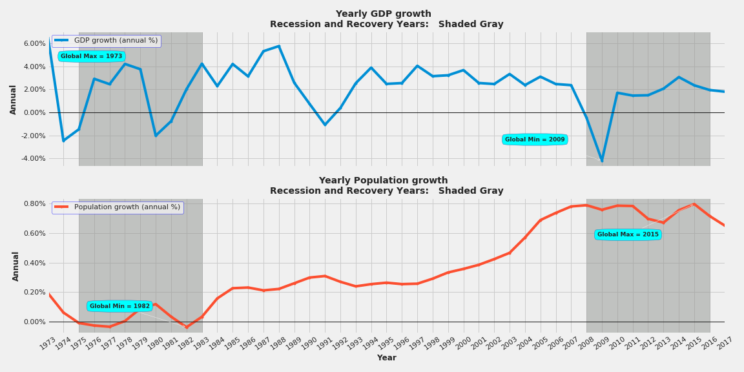 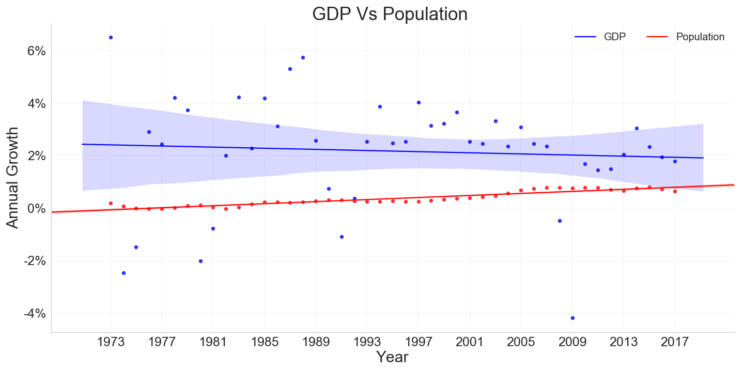 Life expectancy at birth is the number of years a new-born on average is expected to live if the death rate does not change. It is one of the health status indicators. In the UK, the life expectancy has continuously increased over the year with females most likely to live longer than males (Figure 3). However, since 2015, the years of life expectancy has not improved and is approximately 83 years for females and 79 years for males.

Figure 6 shows how the exports and imports of goods and services progressed over the years. UK was exporting approximately the same amount as importing till 1997. Since then the UK imports more than it exports resulting in a trade deficit. A trade deficit leads to a country borrowing from other countries to pay for extra imports resulting in out ow of domestic currency to foreign markets and negative balance of trade.

Figure 6: Exports Vs Imports of Goods and Services

Figure 7 shows a comparison between the merchandise exports and imports from a foreign country. Merchandise is referred to as retail goods and not services. It displays that over the years the imports have increased than exports. Since 2005, exports to other countries from the UK have remained almost the same with increased imports. This difference results in decreased prot and unsustainable growth impacting the public’s opinion.

Figure 8 & Figure 9 show the percentage of import and export of merchandise by sector. The plots show that manufacturing exports/imports are more important sector than food, fuel, agriculture and ores and metal. The increase in manufacturing imports has been more significant than the exports. In 1973, UK manufacture exports and imports were 79% and 49% respectively of the merchandise. In 2016 both exports and imports stood at 75%. This can be attributed to the increased globalized and cross-border arrangements and fast-growing economy. 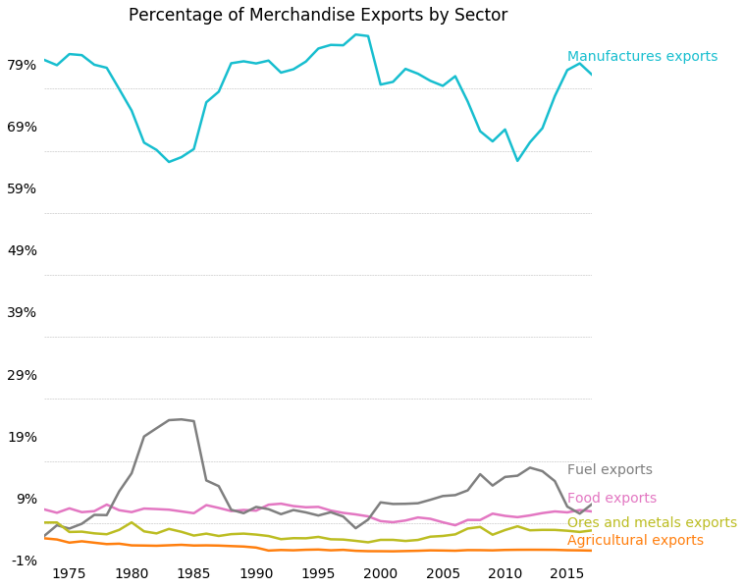 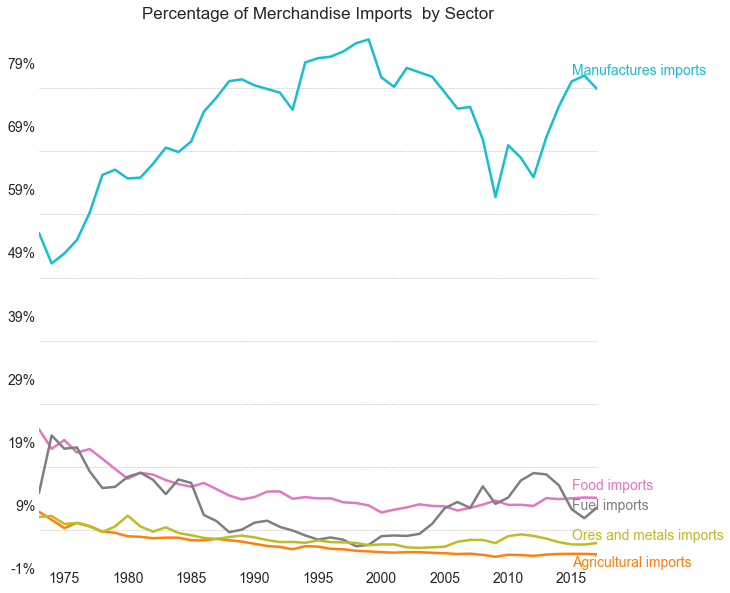 Focusing on the sectors without manufacturing show that imports for food has decreased over the years but has always been more than the exports. Import for agriculture, fuel, ore and metal sector has decreased to almost the same level as the exports. The increased imports and decreased exports result in a trade deficit. Trade deficit is described as when a country does not produce enough goods and must import goods for its residents. An increase in imported goods also leads to drop in prices for consumers and in inflation. However, in the long run, it results in creation of fewer jobs due to the domestic companies inability to produce goods and compete at lower prices. Normally, manufacturing and lower paid jobs are most affected due to the competition from imports[13]. 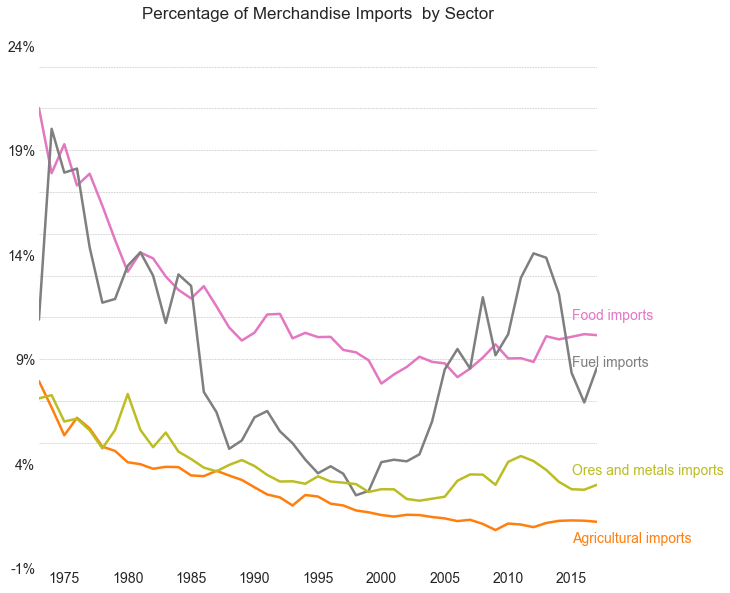 Figure 12 shows the percentage of commercial service imports and exports. It again highlights the growth in industries which are higher paid jobs against the lower paid jobs. The exports increased more than imports in computer, communication, financial and insurance services industry. These industry had exports of 80% and 55% imports respectively. The growth of these industries has also occurred very quickly and had a strong relationship between economic growth and average contribution to GDP. However, transport and travel services industry has witnessed a dramatic fall in their exports from the total of 77% in 1973 to 20% in 2017. The imports of these sectors have also halved between 1973 and 2017. The change in commercial service industry has resulted in job insecurity and wage gap [2]. 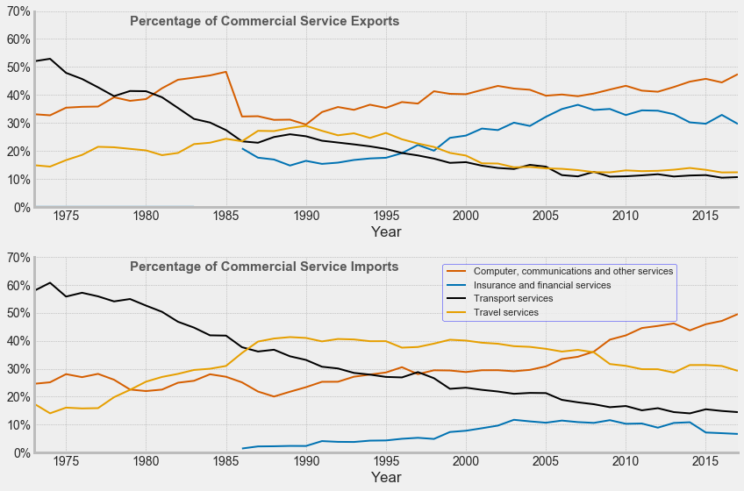 Figure 14 shows the unemployment among 15-24 years old. It depicts that males are more likely to be unemployed than females. The total youth employment was 22% in 2014 and since then has fallen to 12% in 2017. This fall can be attributed to the increase in part-time employment because a youth might accept a temporary position to gain some experience. Youth unemployment affects a job seeker by having a longer job searching period resulting in gap in employment history, unable to apply the education into practice and loss of skills. The job market risk loss of talent. There are increased economic costs with money being paid out on social welfare and less tax revenue generated.

Figure 15 shows school enrollment for primary, secondary and tertiary. It shows that the number of students entering secondary and tertiary education increased as time progressed resulting in more educated residents. This played an important role in both monetary and non-monetary benefits in the UK. People changed their career to work in a knowledge-based industry sector such as finance, computer services, life sciences and telecommunications. They also have a high level of social tolerance and actively participate in the democratic process. However, the number of school enrollments fell between 2013 and 2016. This could be due to a drop in population growth as highlighted in Figure 3.

Figure 16 shows the annual GDP growth and inflation among the 5 largest economies in the EU since 2006. The left graph shows that the UK did not recover as quickly as Germany and France after the recession. Furthermore, since 2014 the annual GDP growth fell below Germany and Spain. At the same time, annual inflation of UK has remained the highest among the five countries. Inflation impacts the cost of living for the residents with the purchasing power declining with each increase.

Figure 17 shows the consumer price index (CPI) for the UK as compared to the 28 countries in the EU since 2006. CPI is the standard measurement of inflation for basic goods and services such as clothing, food, energy, housing and education. Till 2010, UK had the lowest CPI than the other four largest EU economies. However, since 2010, UK’s CPI continues to rise resulting in the highest value among all the EU countries. As CPI rises the house prices rise while income loses value. 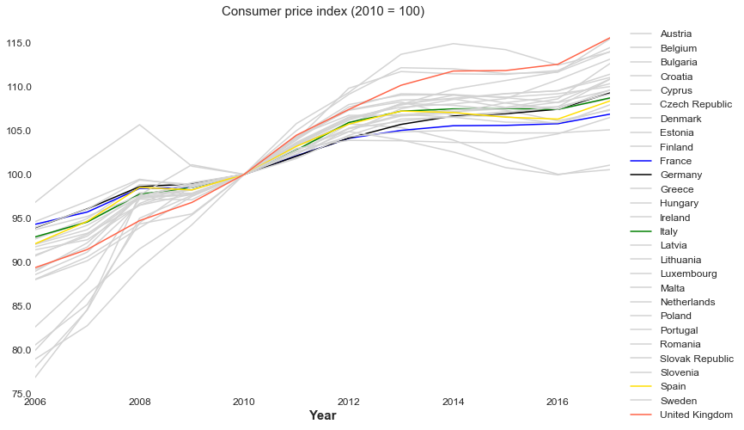 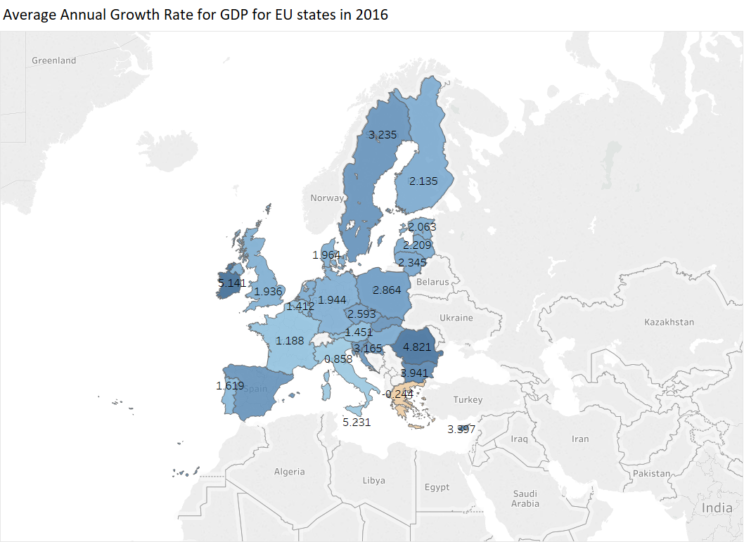 An analysis of the data from world bank indicates that the papers are correct to state that the economic and social landscape of UK has changed since joining the EU in 1973. The different visualizations show that the UK has developed with lower death rate and increased life expectancy. There has been a rise of knowledge economy with a decrease in manufacturing, low-paid and low-skilled jobs. However, the economic transformation has been developing over some time and the residents voted for Brexit as the insecurity and dissatisfaction increased with the governments economic policies.