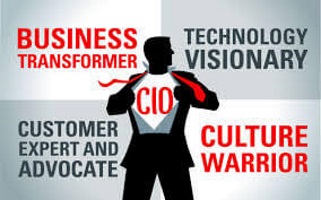 In this blog, we look at the role of CIO today.

The role of CIO today is one of Leading, Governing, Investing and Managing.

Leading – Creating vision by understanding the business and strategic needs by concentrating on lines of business. CIO attends industry meetings with line executives, reads industry publications and web updates, holds informal listening sessions and partners with a peer executive to encourage leadership and project teams to study the marketplace and competition. CIO creates a vision of the future by being proactive and not simply reactive. A vision of a desirable future can provide stability when it sets a direction for an organization. CIO sells the vision & encourages champions of IT projects.

Governing: IS Governance is “The assignment of decision rights and the accountability framework to encourage correct behavior in the use of IT.” It is about deciding who makes decisions and not about making decisions once decision rights have been assigned. CIO establishes governance in an organization by assigning decision rights to help large and diverse IT assets & legislative and regulatory compliance by striking a balance between global and local needs and ensure IT project and portfolio are in sync with business needs.

Managing: CIO establishes credibility by focusing first and foremost on the “today” even before talking about the “tomorrow” and deliver value-added, quality services. CIO foster change on technical aspects while an emphasis on change management. CIO change the way people work by bringing it to the next level

The CIO have a solid understanding of the goals and operations of the organization they serve. CIO role covers a lot of ground, requiring IT leaders to strike the right balance between crafting technology strategy and driving business innovation while overseeing routine IT functional tasks such as cost control, vendor negotiation, crisis management, and operational improvements. CIOs are happily embracing their evolution from order taker and implementer to strategist and business enabler.

For many pioneers and early adopters , the technology was little more than a curiosity. Few people in the 1970s and early 1980s had the vision to see where it was headed. Evolution of CIO in the organization have evolved in parallel with information technology’s development.

In the decade of the 1970s, I/S leaders were challenged to master the technology, to find out what it was capable of doing, and how it could be applied. Their progressive success in doing so through the 1980s gave them a firm grasp on their role as technologist – a role that persists to this day and is of such importance that the role of chief technology officer (CTO) has emerged as a separate position, one which serves in partnership with the chief information officer (CIO).

Having mastered the technology in the 1980s, I/S executives entered the 1990s ready to function as the enabler and to create the business partnerships needed to maximize the use of the technology. At this point, even the late majority and laggards (to use Rogers’ terms again) had adopted information technology and were busy putting it to use. But a curious event happened on the way to the future. Bolstered by their success as technologists and enablers, I/S leaders felt themselves ready to begin functioning as business strategists, that is, to help their organizations use information systems for strategic advantage and to play a proactive role in shaping that strategy. Few of them, however, had prepared for this final role to the necessary degree. Rather than going directly to the fourth cell of strategist, they needed to engage in a re-engineering of the I/S function to introduce the innovations necessary to support the organization’s strategic direction (Hannner & Champy, 1993), thereby adding the dimension of innovator to their previous roles of technologist and enabler. In other words, the route to the strategist role is through the innovator role, not directly from the enabler role.

The technologist uses technical expertise to develop and maintain cost-effective information systems; advises business managers regarding matters relating to information technology; stays abreast of emerging technological developments; and projects their potential impact on the I/S function and the business.

The enabler works closely with the user community to help them maximize the business uses of their present information systems capabilities; networks and communicates with users to understand their present and future I/T needs; and acts as their advocate within the I/S organization.

The innovator strives for leading-edge I/T processes by re-engineering existing systems; updating existing technology; re-tooling the I/S staff; and creating an environment for experimentation and innovation.

The strategist serves as the boundary-spanner between the I/S function and business strategists to ensure that the business is aware of the strategic opportunities made possible through I/T and that the I/S organization is ready to provide support and leadership for new business initiatives.